Problem: A homeowner in Easton, PA needed a new boiler. His old one kept breaking down. It also used more energy than it used to require. He wanted a smaller unit and one that was better for the environment.

Solution: We installed a Weil McLain Aqua Balance Combi Boiler. It takes up less room than his old one, uses less energy, and is “green.”

A homeowner in Easton, PA gave us a call … again. We’d been out on a few boiler repair calls over the last few years. This time, our Comfort Consultant, Jeff Scarillo, went out to follow up on a recommendation from one of our techs: It was time to invest in a new high-efficiency boiler.

Jeff knew this would be a big purchase. But, he also knew the warning signs of a failing boiler. The one here was old and on its way out.

A new model would do more than just keep our homeowner warm. It would also keep his energy bill down. And, it was better for the environment.

Our homeowner wasn’t sure at first. He knew some hvac companies could take advantage of someone who didn’t know a lot about this stuff.

But, he’d called UGI HVAC plenty of times in the past. And, he’d read all our great online reviews, from Harrisburg and all over central Pennsylvania to Reading and Bethlehem in the Lehigh Valley.

Jeff took plenty of time to talk with our homeowner. They went over the problems with the current boiler and his choices for a new one. Soon, our homeowner was confident in his choice to replace the unit.

Problem: A homeowner in Easton, PA needed a new boiler. His old one kept breaking down. It also used more energy than it used to require. He wanted a smaller unit and one that was better for the environment.

Solution: We installed a Weil McLain Aqua Balance Combi Boiler. It takes up less room than his old one, uses less energy, and is “green.” 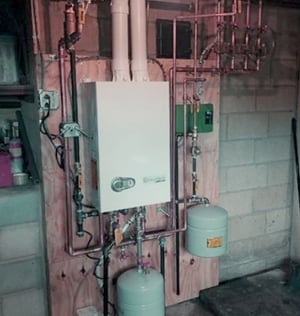 Signs of a boiler breakdown

Now that our homeowner was ready to replace his boiler, he could take his time and choose the right model. He didn’t need to rush around in the dead of winter, with no heating, dealing with hvac companies and making a snap purchase on a big-ticket item.

There were a few signs that it was time for an upgrade. The first clue was its age.

Even when you’re keeping good care of your boiler, it’ll start going south after 15 years or so. In this case, our homeowner stretched his out more than 20 years. It was ready to retire.

And, it was showing all the usual warning signs. First off, the gas bill kept getting higher each winter. But the old heater just wasn’t working as well anymore.

It needed more gas to do the same amount of work. Same as when an old car starts getting lousy gas mileage.

And, what made that even more frustrating was that it wasn’t even keeping the place warm! Our homeowner noticed cold spots in the house. Sometimes, the temperature would dip and then come back up.

Then, of course, there was the biggest warning sign of all: Having to call his HVAC company so often. We’d had to come out quite a few times over the last few years for repairs.

Put that all together, and it meant that it was time to start looking for something new.

Advantages of a high-efficiency boiler 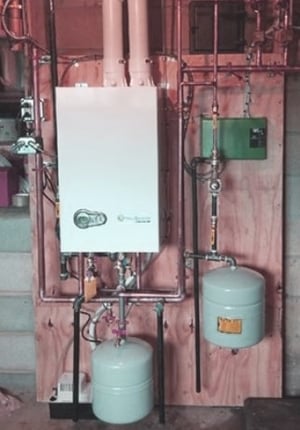 Jeff Scarillo talked with our homeowner about a high-efficiency boiler. A model like this fit a lot of what he was looking for. In particular, this one:


All this made the Weil McLain Aqua Balance Combi Boiler an excellent choice for this home. The “combi” part means it provides heating and hot water all in one. On top of that, it also hits all those other things our homeowner wanted in his new unit.

What makes this model so good at that is the exhaust. Any time you burn fossil fuels, some of that energy gets lost in the exhaust. That's measured by Annual Fuel Utilization Efficiency. But that’s a mouthful, so we just say AFUE.

The higher the AFUE, the more of the gas actually gets used correctly. Now, the one that was breaking down started off around 80 percent AFUE. That means 20 percent of the gas our homeowner bought got wasted.

And, that number only got worse as the unit got older.

Now the new one has 94.4 percent AFUE. That means less than six percent of the gas gets lost in the exhaust. What a difference!

And, of course, burning less fuel is better for the environment. This way, it’s got a smaller carbon footprint than other models. That means it produces less waste.  That was important to our homeowner. 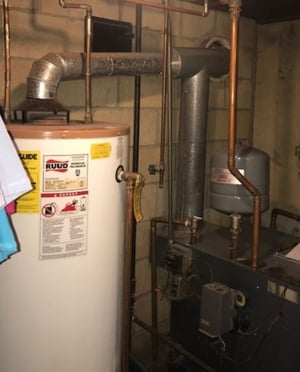 The last thing Jeff pointed out to our homeowner is the size. When you picture a boiler, you probably imagine this huge thing that sits on the floor and takes up a whole bunch of space in the basement.

Not so with this one. It looks like a fuse box only a little bigger. Jeff mounted it right to the wall. This way, it doesn’t take up a lot of room. And, it’s not on the floor. That way it doesn’t get damaged if there’s a leak or flood.

Saving money with a high-efficiency boiler

Let’s not kid ourselves. Going green and getting a small high-efficiency boiler is great. But the green that really matters is money. Will this new model cost less than the old one?

In the long run, yes. Of course, there’s the cost to buy and install the new unit. But, it pays for itself over time.

First off, Jeff made sure our homeowner applied for a rebate from his gas company. A lot of utilities nowadays offer rebates for people who buy new high-efficiency appliances. Out in the Lehigh Valley, the gas company here is no different.

So for starters, our homeowner got $1,800 cash back on the new combi boiler. That’s a big chunk of what he had to pay for it. Next, he took advantage of our no-interest financing. Now, he pays $106 a month for the rest of it.

Meanwhile, it’s costing him even less than that if you think about it. That’s because of all that energy-saving stuff we talked about before. Less gas equals lower bills.weil

In this case, Jeff did the math and figured out that our homeowner now uses three-quarters of the gas he used to use. That’s around 25 percent off every monthly bill.

Now, put those monthly savings up with the rebate and the financing. Our homeowner now has peace of mind about his heating system. And, he’s got more money in his pocket.

Are you looking to replace an old boiler? You’ll want to learn more about the high-efficiency models out there today. Give us a call, and we’ll help you choose the one that’s right for your home and your budget.